The Union Guidelines for the development of the trans-European transport network (TEN-T)[1], defining a new transport infrastructure policy, and the Connecting Europe Facility[2], providing a new philosophy for infrastructure investments, have been adopted by the European Parliament and the Council of the EU in December 2013.

This legislative package reviewed substantially the TEN-T policy and placed the emphasis on high European added value connections, which will allow for the realisation of a real integrated trans-European transport network. With the budget of the Connecting Europe Facility, more than €26 billion will be dedicated to the financing of projects of high EU interest, such as cross-border connections and bottlenecks on the main corridors along the TEN-T, in particular for railways and inland waterways.

A new TEN-T policy for a truly integrated Single Market

A good inland transport infrastructure with seamless border-crossing and well connected with ports and airports is essential for the development of trade within the European Union and with its commercial partners. Investments in infrastructure are expected to improve the Union’s long-term competitiveness, while giving an immediate boost to growth. In addition, the objective of greening the transport sector advocated by the EU will not be possible without the adequate infrastructure supporting the switch to cleaner transport. 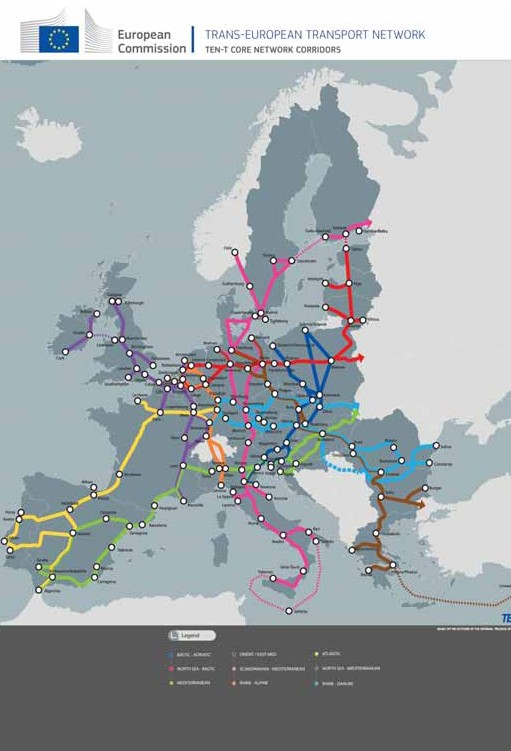 The core network will be the economic lifeblood of the single market, allowing a real free flow of goods and people around the EU and especially in the newer Member States (Figure 1). It will connect 94 main European ports with rail and road links, 38 key airports with rail connections into major cities. In Hungary, the core network is rather dense compared to the EU average, in particular in the fields of railways, reflecting the strategic location of the country at the cross-roads of several trans-European corridors.

The core TEN-T network will be supported by a comprehensive network of routes, feeding into it at regional and national level. The aim is to ensure that progressively, and by 2050, the great majority of Europe’s citizens and businesses will be no more than 30 minutes’ travel time from this comprehensive network.

The TEN-T is not only about building and upgrading new or existing infrastructure. Homogeneous and ambitious standards are to be deployed across the whole network and will leverage on the enhanced accessibility, in order to boost competitiveness, notably of the more peripheral regions of the Union. Supplementary measures, such as innovative information and management systems are also part of the new policy. Full interoperability will be ensured by deploying the European Rail Traffic Management System (ERTMS) on the network.

Taken as a whole, the new transport network will deliver safer and less-congested travel, and smoother and quicker journeys. In order to achieve this goal, projects of high European added value will have priority for EU funding: building or upgrading cross-border sections, removing bottlenecks on the main European traffic routes, ensuring multimodal integration or promoting rail interoperability etc. Investments in transport infrastructure should also contribute to achieving the goals of reduction of greenhouse gas emissions in transport by 60% by 2050. Therefore, in line with the objectives of the Europe 2020 Strategy and the Commission White Paper entitled ‘Roadmap to a Single European Transport Area – Towards a competitive and resource efficient transport system’, the focus will be towards the development of the infrastructure for the greener modes of transports, such as railways and inland waterways. 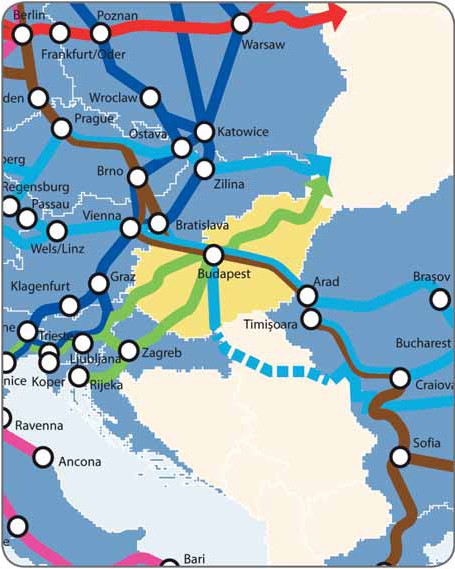 The implementation of the TEN-T core network will be pushed ahead by nine strategic Core Network Corridors[3] with multimodal connections, which will stretch from East to West. The new Corridors are not just lines on the map: they are covering the most important traffic flows and cross-border projects and are the basis for integrating transport, ensuring technical compatibility and a coordinated development and management of infrastructure. The corridors are there to enhance cooperation between Member States, infrastructure managers, regional authorities and other stakeholders, in particular when it comes to cross-border projects, interoperability and inter-modality. They will help to concentrate investments and will allow infrastructure work to be synchronised. This is where the EU’s added value lays.

€26 billion for investments in the TEN-T

The vision of the new TEN-T policy would stay without effect if there were no financial resources to support its implementation: this is the role of the new Connecting Europe Facility (CEF), the new funding instrument for trans-European networks. The CEFhas a budget of €33.2 billion for the new programming period 2014–2020 to finance infrastructure of EU interest in the sectors of Transport, Energy and Telecommunication. Out of this total amount, €26 billion is the budget which will be invested in the TEN-T only, through grants and via innovative financial instruments (such as the Project Bonds).

To achieve the maximum effect of the available funding, there is a need to prioritise according to the highest EU added value. This is the Connecting Europe philosophy. The CEF aims at supporting infrastructure with a European and Single Market dimension, targeting EU support on priority networks where EU action is most warranted: bridging major cross-border missing links and removing bottlenecks on the core network, where the projects, although they don’t represent a national investment priority, will build connections between the patchwork of national networks in order to complete a real network at European level.

The CEF budget is significant and has tripled compared to the 2007-2013 TEN-T financing framework. However, it will not cover the high investment needs identified. But the CEF funding is expected to effectively act as “seed capital” to stimulate further investment by Member States. But the investments needs to deliver the TEN-T, identified together with the Member States, are huge. The cost of the first phase of implementing the network until 2020 is estimated at €500 billion. Of this amount, about half alone will be needed to remove the main bottlenecks on the Core Network.

This is why, first of all, the CEF budget has to be spent in full complementarity with other EU funding instruments, such as the European Structural and Investment Funds (ESIF), available also for transport infrastructure, and Horizon 2020, available for financing the research and innovation projects in the field of transport. The Commission, with each Member State, is making efforts to synchronise the planned transport investments proposed under different instruments to ensure the best use of the limited funding available.

The CEF is also expected to act as a catalyst for further private and public funding, by giving infrastructure projects credibility and lowering their risk profiles, thereby attracting investors. A key element of the CEF is the more systematic use of innovative financial instruments (e.g. Project Bonds), which can leverage the private sector’s contribution to transport infrastructure, providing a funding alternative to traditional grants and filling financing gaps for strategic investments. The CEF builds on the experience of existing financial instruments put in place in cooperation with the European Investment Bank (EIB), such as the Loan Guarantee Instrument for trans-European transport networks projects (LGTT), the pilot phase of Project Bonds and the Marguerite Fund.

The new TEN-T policy, supported by the CEF, will also reinforce the connections between the Eastern and the Western parts of the continent, thereby fostering the European territorial integration and increasing the competitiveness of the newer EU Member States.

In order to reach the main objective of completing the network within the set deadlines and to support the development of the TEN-T in the Member States eligible to the Cohesion Fund (the ‘Cohesion Member States’), such as Hungary, €11.3 billion have been transferred from the Cohesion Fund to the CEF to be spent on projects of high European added value, in priority on the Core Network Corridors, on cross-border sections, especially in the rail and inland waterway sectors, in coherence with the European and national transport strategies. Therefore, out of the CEF budget of €26 billion, €14.9 billion are available for all twenty-eight EU Member States and €11.3 billion are reserved exclusively for the fifteen ‘Cohesion Member States’, including Hungary.

The €11.3 billion will be spent according to the rules of the CEF, but with more advantageous provisions, such as therespect of national allocations until the end of 2016 – which will ensure that the money allocated to a Member State is reserved for the first three years of the programming period – and higher co-funding rates of up to 85%. The ‘Cohesion Member States’ experiencing difficulties in preparing and implementing mature and realistic projects will also benefit of specific assistance, such as support for project preparation or targeted grants to the railway infrastructure managers.

Reaching for the European ‘added value’

In January 2014, the European Commission adopted the Communication ‘Building the Transport Core Network: Core Network Corridors and Connecting Europe Facility'[6], setting the transport funding priorities for the CEF. Most of the available budget will be spent on cross-border projects on the nine multimodal Core Network Corridors. These projects have been pre-identified by the Commission in consultation and cooperation with the Member States concerned and are listed in Part I of the Annex I to the CEF Regulation. Another funding priority is the implementation of traffic management systems, which allow making the best use of the existing infrastructure (ERTMS for railways, SESAR for aviation).

The Commission will also adopt soon the first work programmes for the allocation of financial support under the CEF, which have been endorsed unanimously by the Member States on 5 March 2014, and which will cover a budget of €12 billion. This budget will be spent through a call for proposal, which will be launched by the Innovation and Networks Executive Agency (INEA) in September 2014. The list of projects to be co-funded by CEF in the first year will therefore be ready in spring 2015.

As the successor of the former TEN-T programme, the CEF will be managed centrally by the European Commission, which will be responsible for the selection of projects through competitive calls for proposals and, through INEA, for the monitoring of project implementation. The Member States will be responsible for the implementation of the projects. INEA is the successor to the TEN-T Executive Agency, which has managed the TEN-T programme between 2007 and 2013. During this period, about 30 projects have been financed by the TEN-T programme in Hungary, in particular feasibility studies, but also projects implementing ERTMS.

The CEF is a very good example of European ‘added value’ that the EU budget can deliver, especially in the newer Member States, which can benefit of a budget that is earmarked for them, as well as of targeted assistance to improve their capacity to prepare and implement projects. But beyond the actual financing of projects with high European added-value all across EU, the development of the TEN-T through the CEF is expected to have many other positive effects, such as ensuring the free movement of goods and services, overcoming the market segmentation, offering greater choice for consumers, fostering territorial cohesion.

During 2014–2020, the CEF is expected to contribute to the financing of about €100 billion of investments on the TEN-T, via grants and via innovative financial instruments. The fact that the Member States agreed to allocate a budget of €26 billion to the CEF reflects their endorsement of the new policy approach, which concentrates on the European rather than national level. It also reflects their trust in the CEF as one of the key initiatives of the Commission for delivering sustainable growth and jobs.

With the budget secured, it is now up to Member States and projects promoters to start building the projects and work together to make the Core Network Corridors a reality. The list of potential projects is long and Member States have to choose wisely their priorities, also taking into account the quality and maturity of the projects that they will apply with for funding. The European Commission is available to discuss potential projects and envisage support actions in order to ensure that Hungary will make the best use of the Connecting Europe Facility.