Mobility is the defining aspect of the twenty-first century, and the foundation upon which freedom and wealth, social progress and prospering economies are built. Major global developments, such as climate change, dwindling resources, urbanisation and demographic change are influencing the future of mobility – and present the transport industry with big challenges. From 23 to 26 September the international rail industry will be displaying the products designed to confront these developments at InnoTrans in Berlin.

This year, at the leading international trade fair for transport technology, more than 2,500 companies will be exhibiting products and services capable of making rail transport safer, more efficient and environmentally friendly. Over 100,000 trade visitors are expected in Berlin, where they will gain a comprehensive overview of the market. Rolling stock, vehicle interiors as well as passenger information systems and tunnel construction technology are among the topics featured at InnoTrans. Be it prototypes or market-ready rail systems, the entire value chain will be on show. 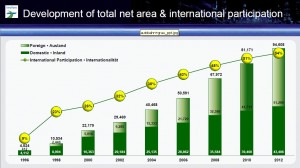 The trade fair’s international dimension is a trademark of InnoTrans. Once again, around half of the exhibitors at this year’s event will be from abroad. Hungary will also be represented by 15 companies in Berlin. In addition to global players such as Alstom, Bombardier and Siemens numerous international suppliers and rail companies as well as 27 industrial associations from 21 countries will be present at InnoTrans 2014. Furthermore, service providers and leading research institutions from Germany and abroad will be among the exhibitors at this year’s event. 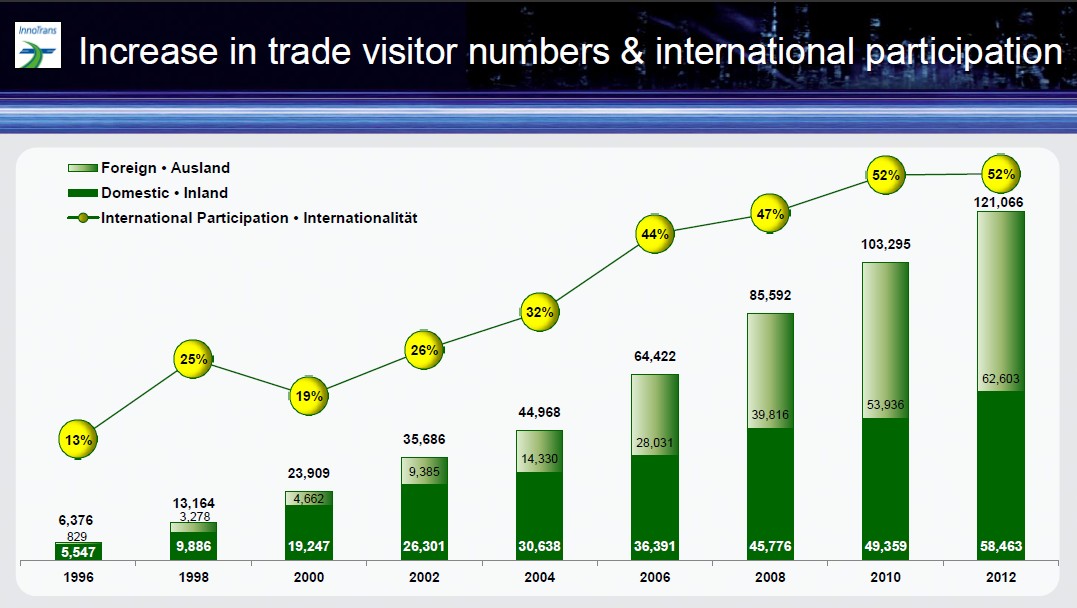 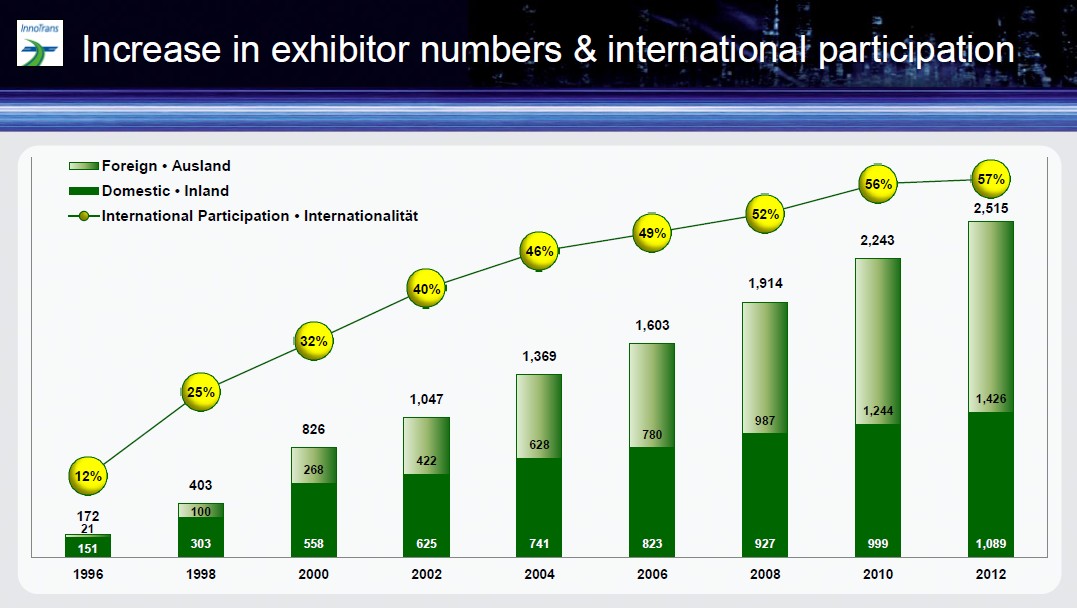 More than 200 newcomers will be exhibiting at InnoTrans 2014, thus underlining its importance as a marketing platform. The participation of Tengiz Trans Group and PT. Len Railway Systems means that Kazakhstan and Indonesia will be represented at InnoTrans for the first time. In terms of display area it is the representations of Taiwan, Brazil and India that will stand out most. Compared to the last InnoTrans Taiwanese exhibitors will be occupying three times the amount of display space. Companies from Brazil and India will also be exhibiting on larger stands. Their displays have increased by 120 and 70 per cent respectively.

In Berlin 39 combined displays featuring 21 countries and regions will be focusing visitors’ attention on the railway expertise of the international supply sector. Japan will again be occupying its own hall and for the first time a German federal State (Saxony) has also booked an entire hall. China will feature prominently on a combined stand organised by the China Academy of Railway Sciences (CARS). According to Wei Liu, the director of CARS: “Around 20 of China’s leading suppliers will be taking part and are interested in doing successful business with the international rail industry. The main topics on the stand will be energy efficiency and protecting the environment.”

InnoTrans as a marketing platform

InnoTrans is a driving force of the economy and showcases the industry’s products and services. Over a period of four days it will provide a concentrated display of the supply and demand sides of the international market for rail industry products. For rail industry companies this trade fair represents an extremely important marketing instrument. It enables them to position themselves on the market, introduce new products and to take on new markets. It is also a major gathering of purchase management representatives. The many personal meetings which take place are ideal for establishing new and long-term business contacts and for cultivating existing relations.

Furthermore, at InnoTrans the industry attracts media attention by holding awards ceremonies, handing over keys and announcing business deals. Traditionally, it also displays products debuting on the world stage, and many have already been announced for this year’s event. Among them is a new system marketed by ECD Electronic Components which enables the remote monitoring and documentation of running and idling times of railway wagons. Another world premiere is a new railway wheel measuring device supplied by the company Herbert Gehrisch Elektrotechnik.

The display area at InnoTrans 2014 exceeds that of previous events by far. This year, in order to satisfy the high industry demand for display space, the CityCube Berlin, the multi-purpose venue for trade fairs and congresses, will be providing two extra floors for exhibiting products. Each floor covers 6,000 square metres. Thus, for the first time, InnoTrans will be occupying 28 display halls (previously 26). The new CityCube Berlin is adjacent to the south entrance of the grounds. It can be accessed from two sides and is joined directly to Hall 7.

In the CityCube Berlin the focus will be on transport companies and maintenance services. Exhibitors will include Deutsche Bahn, Russian Railways (RZD) and the East Japan Railway Company. Solaris will be showcasing its new buses in the CityCube and the Berlin/Brandenburg region will also be represented. “We will be exhibiting the railway expertise of the capital and its surrounding region“, says Melanie Bähr, the managing director of the business development corporation Berlin Partner für Wirtschaft und Technologie. “Around 60 companies will be represented on a combined stand covering 1,000 square metres inside the new CityCube Berlin.“

A major attraction and unique selling point of InnoTrans is the outdoor rail track display area. Occupying 3,500 metres of rail track, this is where trade visitors can take a closer look at more than 100 innovations in rolling stock. They include high-speed trains, locomotives, wagons and road-rail vehicles as well as entire systems for local, regional and mainline railway networks. For the first time the fully booked outdoor display site will feature an additional special gauge display, where the focus is on wide and narrow-gauge rolling stock. 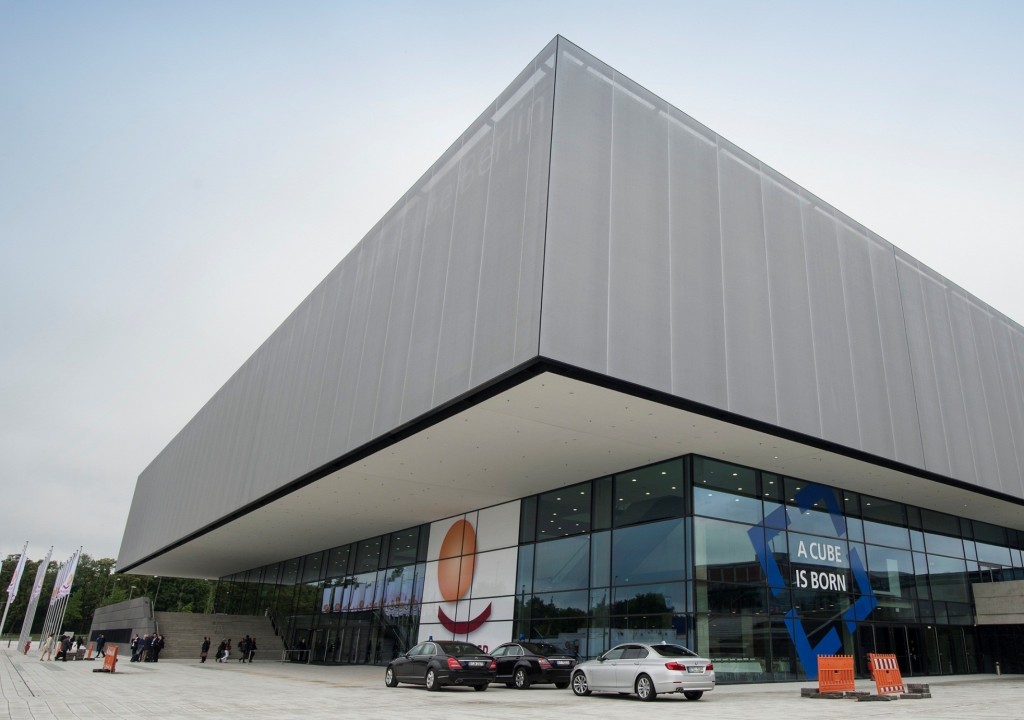 InnoTrans Convention: high-level dialogue and a forum for ideas

International decision makers representing industry and politics will be gathering in Berlin and meeting to hold talks. Numerous panel discussions on the subject of mobility both now and in the future will be taking place at the InnoTrans Convention, where the key event is the Dialogue Forum. This year’s focus will be on five topics, including ‘Authorisation of rail vehicles – moving towards a European model’.

The trade fair segments Public Transport and Interiors will be hosting their own programme with the PTI Hall Forum. This forum includes the International Design Forum and the DB Suppliers’ Forum. The Tunnel Construction segment has also got its own event with the International Tunnel Forum. One of this year’s topics is ’Maintenance and refurbishment – what are the future tasks in tunnelling?’ The Public Transport Forum and the InnoTrans Majlis are also part of the convention. The latter is an exclusive gathering of senior representatives from the Gulf region and Europe.

The Rail Leaders‘ Summit will undoubtedly be one of the highlights of this year’s convention. Numerous transport ministers and director-generals of international transport companies will be taking part in this summit in order to exchange information on cross-border industry issues. ’Railways in a connected world – intermodal and customer-oriented mobility’ is the subject of this year’s summit.

As far as careers and young professionals are concerned InnoTrans has a lot to offer exhibitors and smart career seekers, as it brings the industry into contact with its future employees. On the one hand the trade fair provides the industry with a platform, enabling them to search for new employees. On the other, it lets tomorrow’s engineers take advantage of the advice on offer from personnel officers. Schoolchildren, students and young professionals with a particular interest in rail transport can find out directly about the available opportunities and about careers from the personnel managers of individual companies. Inside the display halls the stands of exhibitors who wish to meet young professionals will bear the orange-coloured Career Point logo.

Anyone seeking information on careers, education and science can find it under one roof in the Career & Education Hall. Its focal point is the Career Pavilion, which provides an outstanding platform for communicating and establishing new contacts. This is where individual meetings with job applicants, company presentations and lectures will be taking place. A total of ten major companies and associations will be represented at the Career Pavilion. With its offer of more than 200 international jobs, the Job Wall provides another valuable service available to exhibitors and career seekers alike.

This year marks the anniversary tenth edition of InnoTrans. Launched in Berlin in 1996, the first event witnessed 172 exhibitors and from the start reported continuous and above-average growth in all the main areas, i.e. exhibitor and visitor attendance, floor space and international participation. In 2000 this trade fair, which takes place every other year on the Berlin Exhibition Grounds, had already acquired the status of a leading international trade fair for transport technology.

From the very start the trade fair’s concept focused on showcasing rail transport technology and on an outdoor display area. In 1996 rolling stock exhibits were still being displayed at the goods station in Wilmersdorf, eight kilometres away from the grounds. Messe Berlin had the foresight to invest in its own rail track site and when the second InnoTrans opened in 1998 a railway loop stood ready to accommodate the rolling stock on the exhibition grounds – a milestone in the evolution of InnoTrans. Bit by bit the rail track site grew to its eventual size and now measures 3,500 metres in length.

In 2000, the launch of the InnoTrans Convention heralded the arrival of a supporting programme of events. The result was a set-up which combined three elements and remains successful to this day: the trade fair, the rail track exhibition and the InnoTrans Convention. Fine-tuning the trade fair concept has continued. In 2006, for the first time, InnoTrans featured five segments with exhibits representing every important field in the rail transport sector. To this day they include Railway Technology and Railway Infrastructure, Public Transport, Interiors and Tunnel Construction.