Due to modern earthworks technologies, it is possible to more intensively compact the load-bearing subsoil material used in the construction of railway substructure. At the same time concepts are being developed to minimize the costly incorporation of base layers by preparing the formation and subgrade protection layers with binders.

These measures usually result in the earthworks having better characteristics with respect to their load-bearing capacity and functionality. However, the improved compaction of the soils and the load-bearing subsoil materials as well as the treatment of the soils with binders are also associated with lower elastic deflection of the rail and the carrying system when the train passes by. As less elastic deflection results in increased stress, stiffening of the subgrade and protection layers leads to increased stress and damage of the railway ballast bed and the railroad substructure. A solution to avoid excessive damage to the railway ballast bed is the installation of a multi-functional geocomposite beneath the ballast layer.

With the further development of the technologies in earthwork construction it becomes possible to compact the in-situ soils and used base course materials in railway substructures more intensely. At the same time concepts are developed to minimize the expensive installation of base courses by preparing the in-situ soils by using binding agents.

These measures generally lead to better properties of the earthwork constructions as to their bearing capacity and their usability. The better compaction of the soils and base course materials as well as especially the soil treatment with binding agents are however associated with lower elastic deflection of the track and the bearing system during the train crossings. However, the higher the stiffness of the substructure, the more concentrated is the load transfer and less sleepers are involved in this load transfer. The result is an increase of the surface pressure under a sleeper and thus the ballast load which will lead to a damage of the ballast and the railway substructure. An approach to avoid the overstressing of the ballast bed is the use of additional elastic elements.

NAUE GmbH & Co. KG in cooperation with the Dresden University of Applied Sciences and the GEPRO Ingenieurgesellschaft Dresden developed a new product by using nonwovens. This product installed under the ballast bed takes over the following functions within the system of the railway track:

Another aspect of railway traffic, which becomes increasingly important – especially in areas with a high density of population – is the noise caused by the railway traffic as well as the resulting vibrations. Also in this case the installation of elastic elements in the track can lead to a reduction of the structure-borne noise by decoupling. By the installation of the elastic geocomposite under the track ballast the complete superstructure is elastically decoupled from the substructure. Thus the transmission of vibrations into the substructure is considerably reduced. 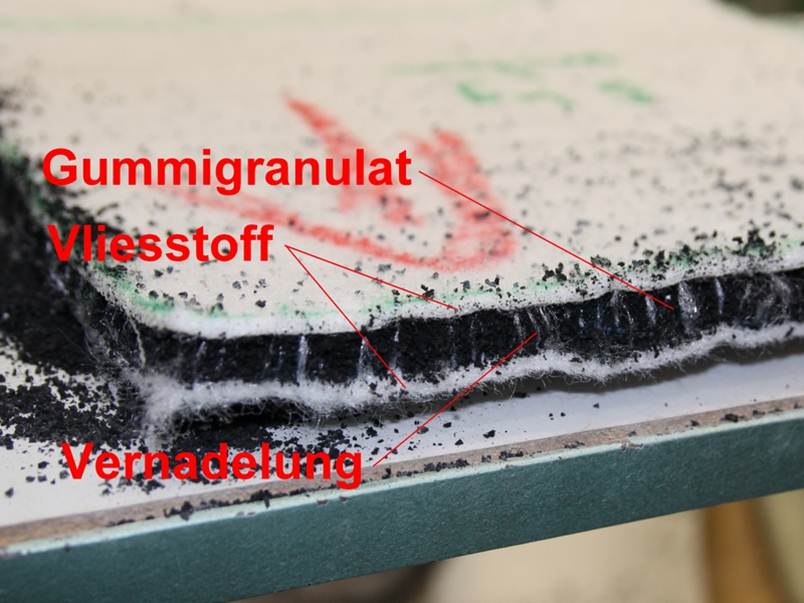 These tests carried out under laboratory conditions show that the new type of geocomposite Secutex® EDF 5000 on the one hand in case of stiff subsoil brings an additional elasticity into the system of the railway track and at the same time shows a protection, separation filtration and drainage efficiency towards the formation. As a result the load conditions for the superstructure of railway tracks can be designed more convenient and the influences in the superstructure and substructure can be reduced.

4.1. Characteristic of the test section

The test field is located in the north of Berlin in the city of Hohen Neuendorf within the line 6087 on the railway bridge Puschkinallee at km 14,821. In this section a track rehabilitation of track 1 was planned including the installation of a sub-ballast layer (Figure 2). 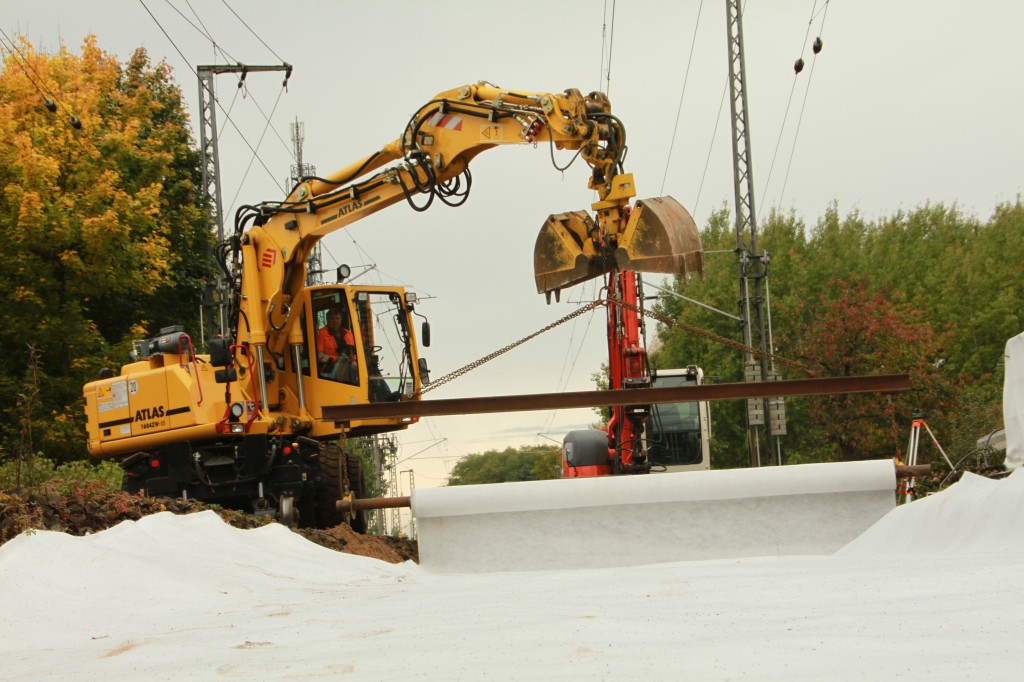 A special deformation resistant installation of the backfill area using cement stabilized or compacted soil wedge of high quality according to the examples given in figure 1 and 2 of the Ril 836.0504 [4] has not been carried out. The 20 cm thick sub-ballast layer was placed up to the point to the bridge abutment. The installation of the geocomposite Secutex® EDF 5000 was carried out with a length of approx. 6 m and approx. 9 m in front and behind the bridge. In this test field vibration acceleration measurements were carried out.

4.2. Evaluation of the vibration measurements

For the evaluation, especially the measurement cross-sections in the embankment area (MQ) 1 without geocomposite and (MQ) 3 with geocomposite have been considered. Because their superstructure properties are comparable as well as because of similar soil dynamic properties of the substructure and the foundation these two measurement cross-sections were very suitable for the evaluation of the effectiveness of the geocomposite Secutex® EDF 5000

4.3. Determination of the insertion loss

The only difference between measurement cross-section (MQ) 1 and 3 is the existence of the geosynthetic composite Secutex® EDF 5000 in the measurement cross-section (MQ) 3. All other factors like the dynamic properties of superstructure, sub-base and subgrade as well as the dynamic stress caused by train crossings are however almost equal. As a consequence the level of insertion loss of the geocomposite Secutex® EDF 5000 can be determined according to [5] resulting from the difference of the two maximum “Third-Rapid Levels” LF, max (fTn). The level of insertion loss which is determined is shown in Figure 3. 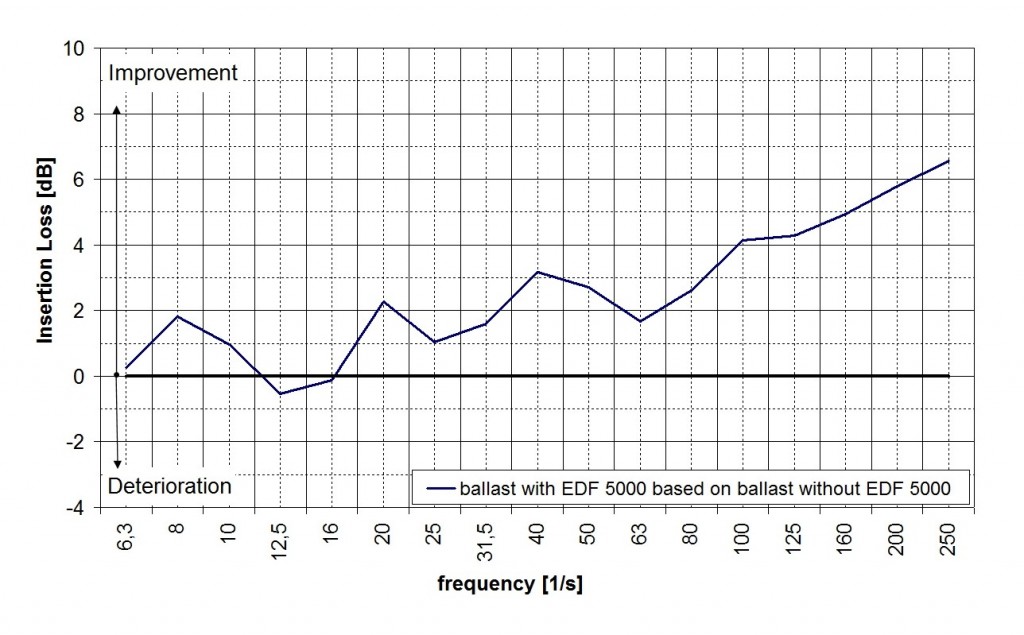 Despite the low stiffness of the sub-ballast/subgrade which is typical for existing lines, an improvement of up to 7 dB, on average of approx. 3 dB can be observed. In the case of a stiffer subgrade (e. g. in case of a binder-stabilized embankment) this value would correspondingly be higher. In case of a rigid subgrade (e. g. in case of application inside tunnel) values of up to approx. 20 dB can be achieved according to [6]. The (minimum) deterioration in the area between 12.5 and 16 s-1 is typical for sub-ballast mats and is a result of the resonance exaggeration in the area of the natural frequency of the geocomposite Secutex® EDF 5000.

The first experiences gained in laboratory and field tests showed, that by using the geocomposite Secutex® EDF 5000

As a consequence the new geocomposite Secutex® EDF 5000 offers – in the case of inhomogeneous, but above all in the case of load conditions with low deformations – a protection of the superstructure / the substructure / the foundation. This leads to an improved track position and to an increase of working life.
The following preferred fields of application must be considered: